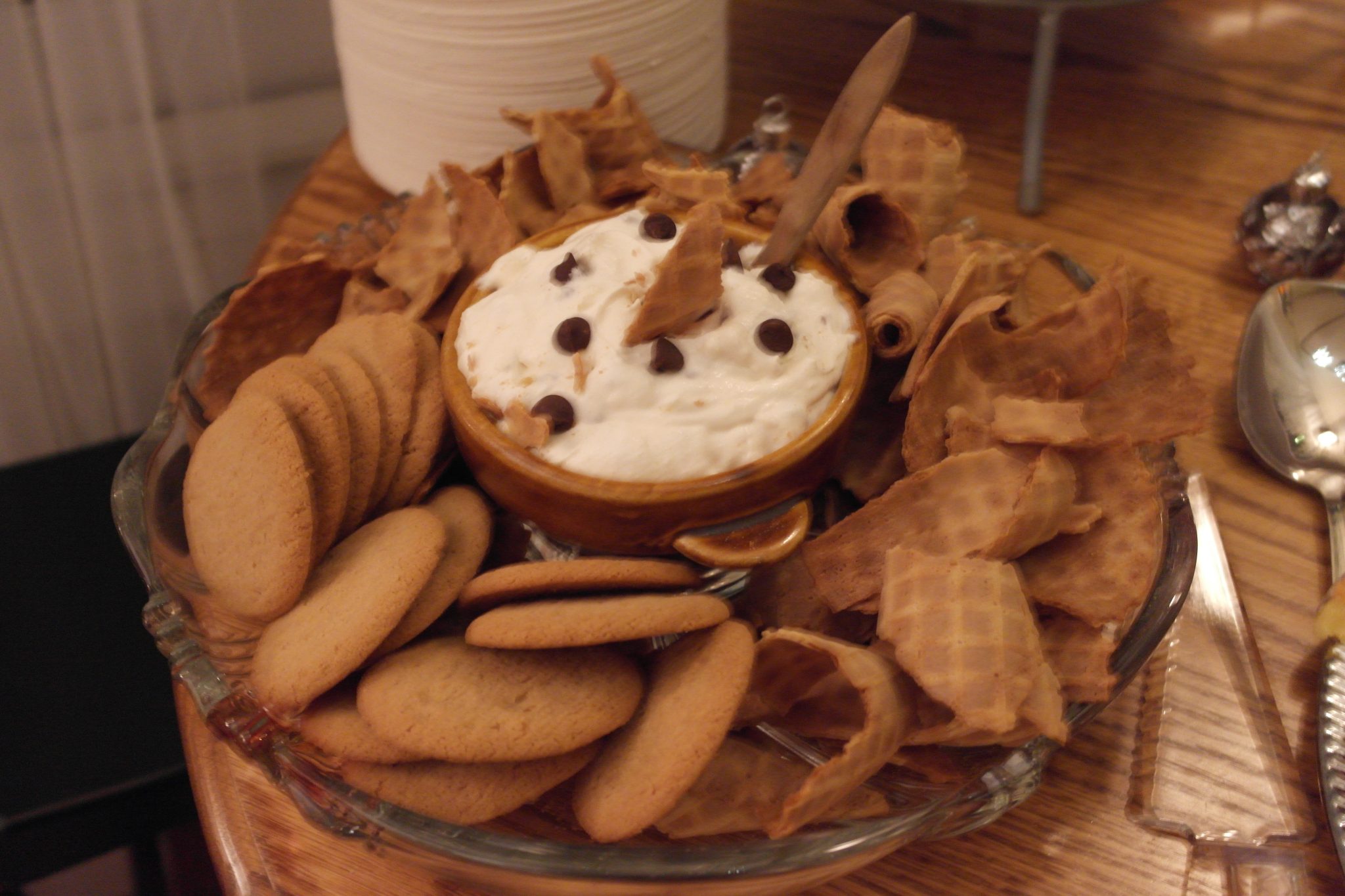 pending new photo – but to give you an idea

Seems one of the big adaptions bast east has been to redesign the Cannoli party but instead of filling individual pastry shells – its revised as a dip with the broken  tubes or  broken even waffle cones. The plus side means not soggy shells! Now I’m a huge fan of Cannoli’s and realized that many variations exist and differences regionally both here in the US and in Italy. This version comes from my Sister back in CT. The adaption I made to it – was I felt it needed a brightness to bring out the ricotta,  so I added the zest.  The Cool Whip thins it enough to “dip” into while lightening its taste some. As with most of my recipes – adapt them to your taste.

Ingredients
Mix all the ingredients above,  till smooth,  then fold in:
Note – this dip style needs a good 6 hours or overnight to set up – so plan to make the night before and refrigerate in a airtight container or use on of my favorite products; Lock & Lock brand containers found on QVC

To serve, place in a chilled bowl, surround traditional cannoli shells, waffle cones, etc. Pick any flavors you like, break apart in dip style pieces. One hint was to use  graham cracker sticks or even GF style grahams/chips. Top the dip with a few extra chips and some shaved chocolate.

A fast, no fuss version of Turkey Cacciatore 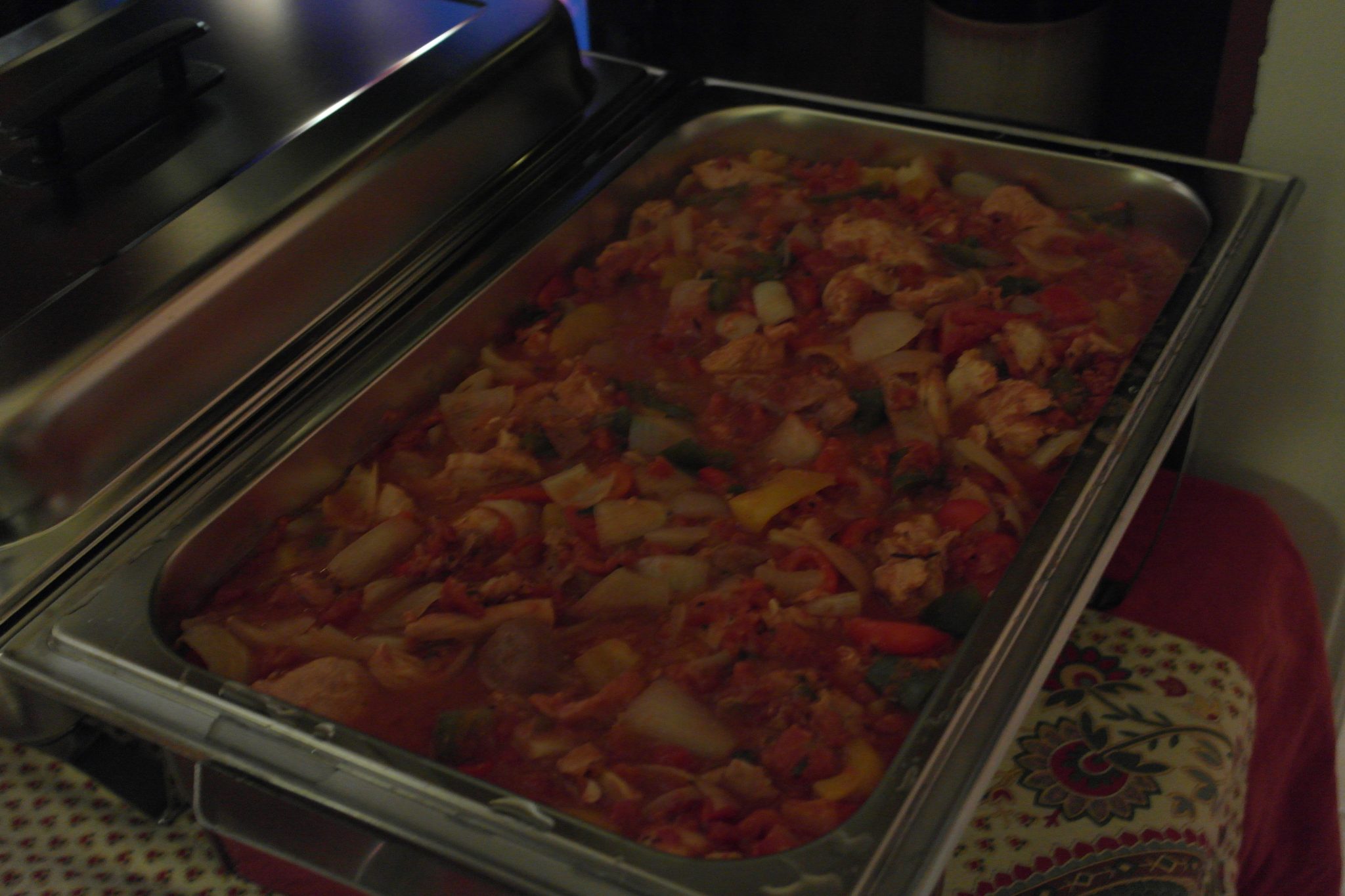 This is an adapted recipe great for parties but skips sone if the tradtional  pre-browning steps usually done for this “Hunters Style” dish. If you have the time and desire – it will add an extra hearty, roasted flavor to the cooking. In either case – it uses the slow cook, braising method that makes it perfect for a party  – so this also adapts for slow cooker fans.

Hint: If I know I want to make this – I will sometime pre-brown the turkey on the outdoor grill grill the day before while making other meats to save a step and reduce clean up (but omit the flour step below).

You can use boned or boneless, or a combination. I find I like to have some of both for home cooking but for a party, I find that boneless is easier but a mix of white and dark meat is crucial to get the rich flavor. 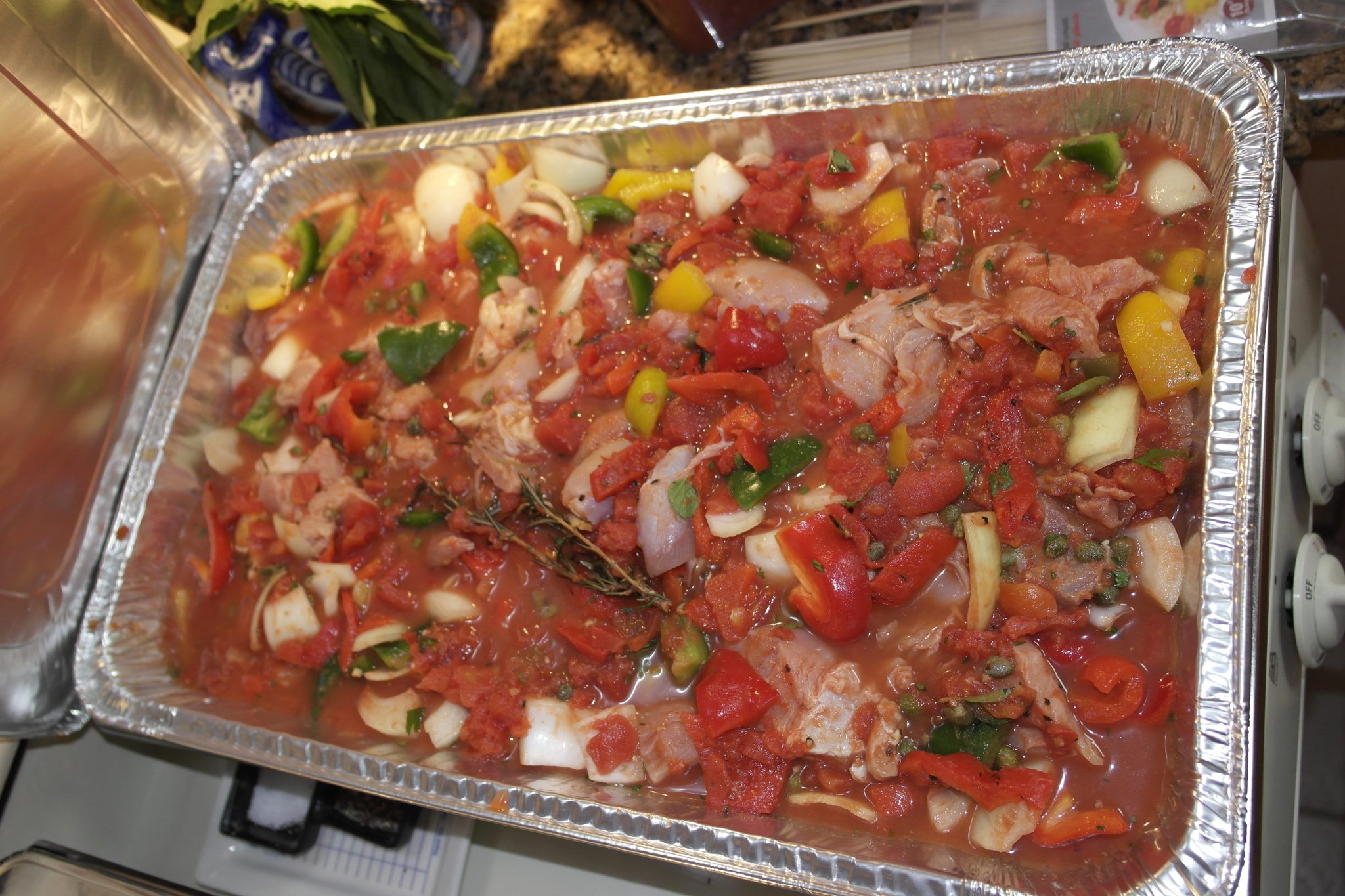 Note: You can always ask the local butcher to debone and skin a turkey for you. They provide you with the meat, skin and bones to use for stock. When I do this – I often toss in a few of the bones to cook with it then discard them before serving.

I tend to use 1lb of turkey to an equal amount of peppers & onions. (so 1lb t, 1 pepper, 1 onion) this version is based on that scale and serves 6-9 depending on how you serve it.

This recipe came to me, by way of a pal of Pauls – I loved the fresh taste, the slight bite of the onion and the sharpness of the cilantro. The peppers can be swapped out for your preferences and to adjust for heat. Much of the amounts is eyeballed and approximate. 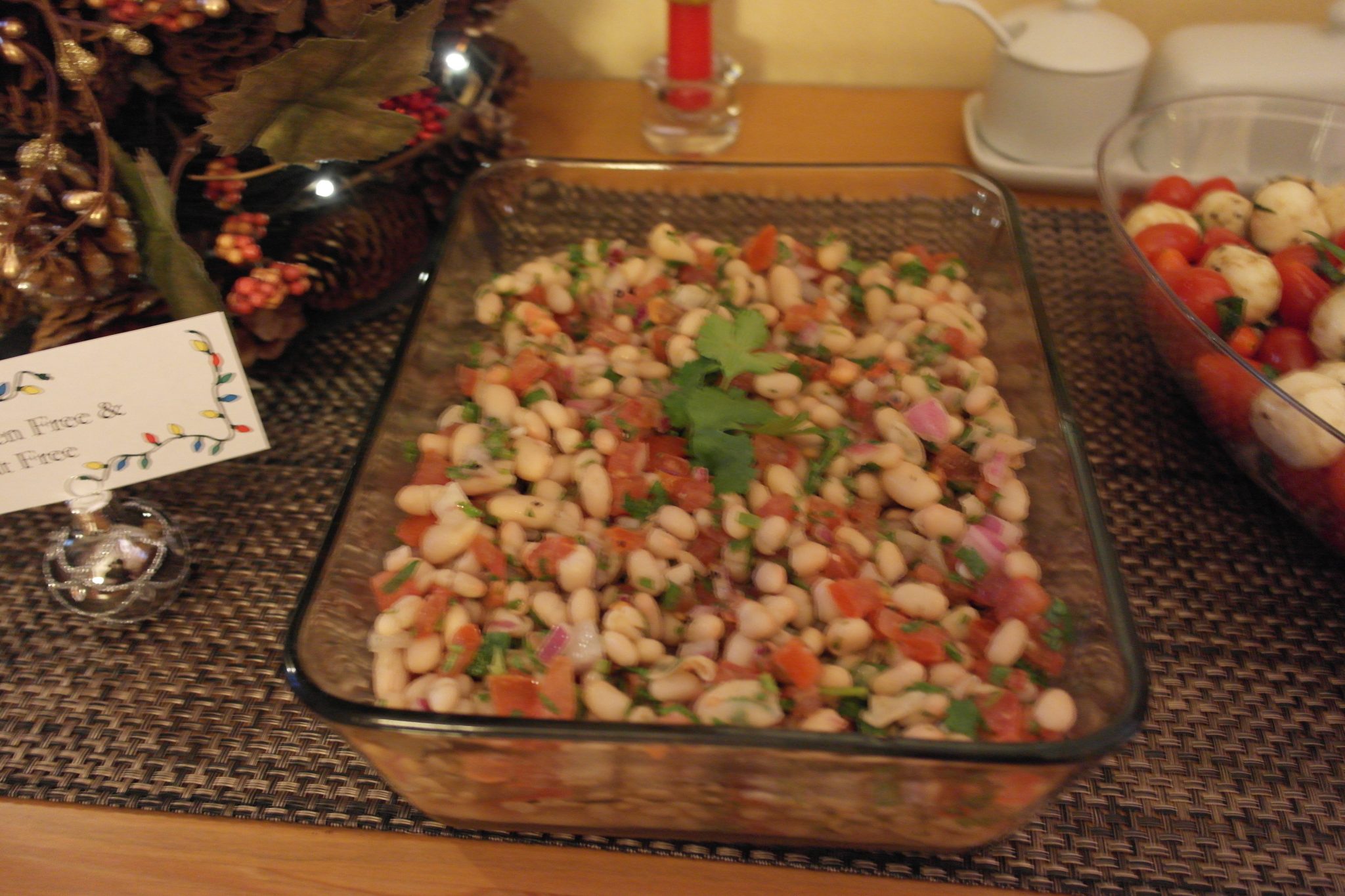 *This dish originally used dried black-eye peas. They can be substituted and keep a great texture.

According to the person who shared it with us, while hand mincing with a sharp knife is the best – a food processor will also work.

This dish needs to sit for at least an hour or even better overnight. Seal in a airtight container.

Before serving, stir, then taste for salt & pepper , then garnish with lime and serve.

These were the “New Recipe” and how could it go wrong – bacon, butter, sweet potatoes, brown sugar, salt … oh and did I mention bacon? I found this recipe in Taste of Home magazine and the only adaption I did was the use of a
maple enhanced salt by the devilishly creative folks at Sinful Salts. They offer some “worth sinning over” salts direct online or currently offered for sale at the Castro’s Under One Roof  Store.

Note: the seasonings on this can be adjusted to your taste or menu. Red pepper flakes, chopped rosemary, nutmeg, seasoned salts, etc. 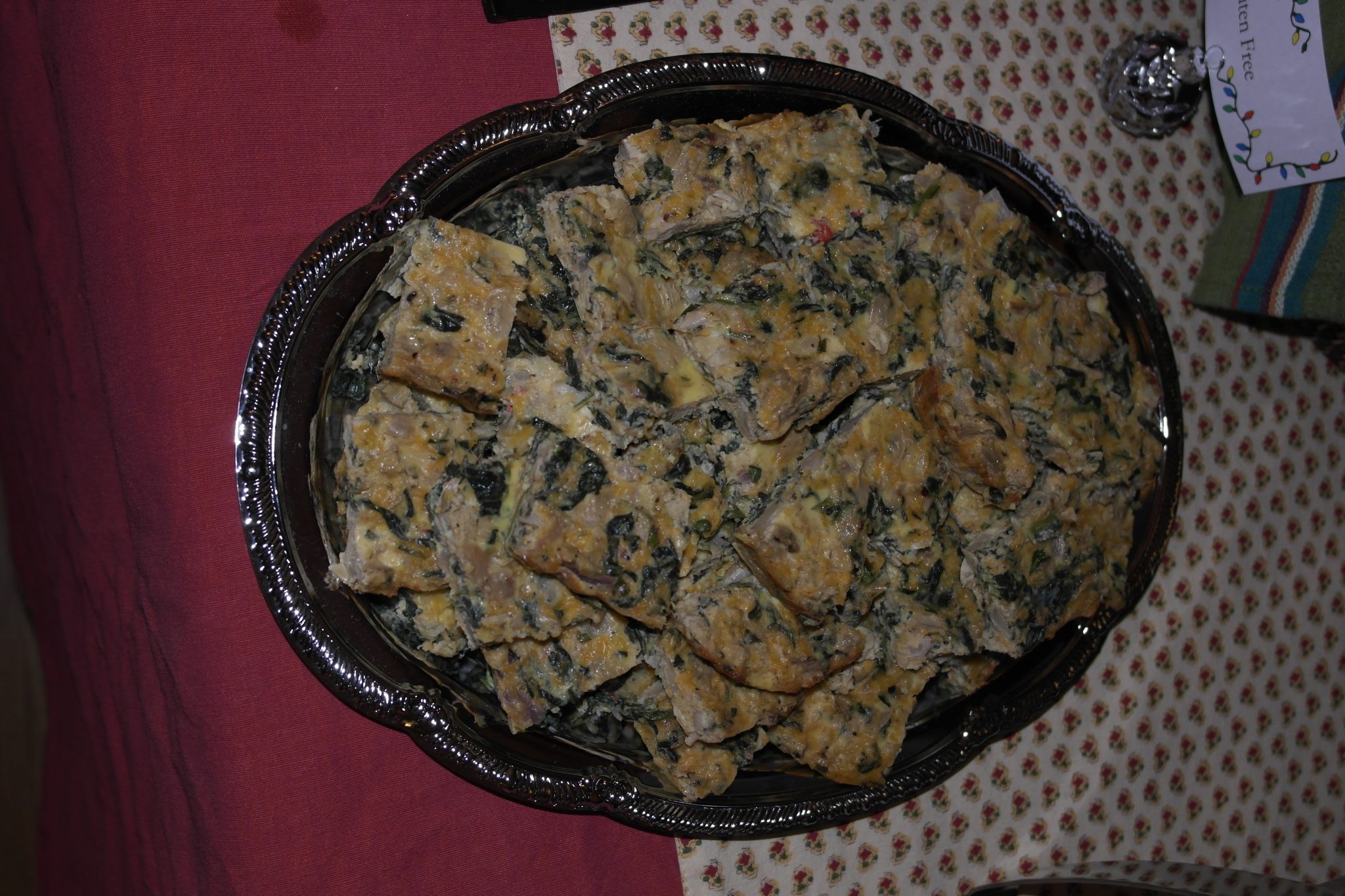 This adaption of an Artichoke  snack takes all the parts of that fav dip and turns it into a solid form. A great starter or stand-in base for a Sunday brunch or midweek “clean out the refrigerator” meal.  Tonights versions had roasted red peppers added into one. The use of the marinade from the artichoke then cooked off really set this apart from other recipes. This version is adapted from one found that was similar to one I have cooked since I was a kid.

I have adapted this to add the spinach and other flavors items. When adapting this – keep in mind the balan

ce between wet and dry as that will affect the final outcome..

rustic cutting board pre-cut instead of pile it “cookie plate” style.

Note: You can also add pre-cooked chicken, sausage, raw vegetables like squash and zucchini to this dish or use with left over roasted vegetables, marinated peppers. For every cup of “stuff” I add, plan to add 1 additional egg to the batter and additional bread crumbs. 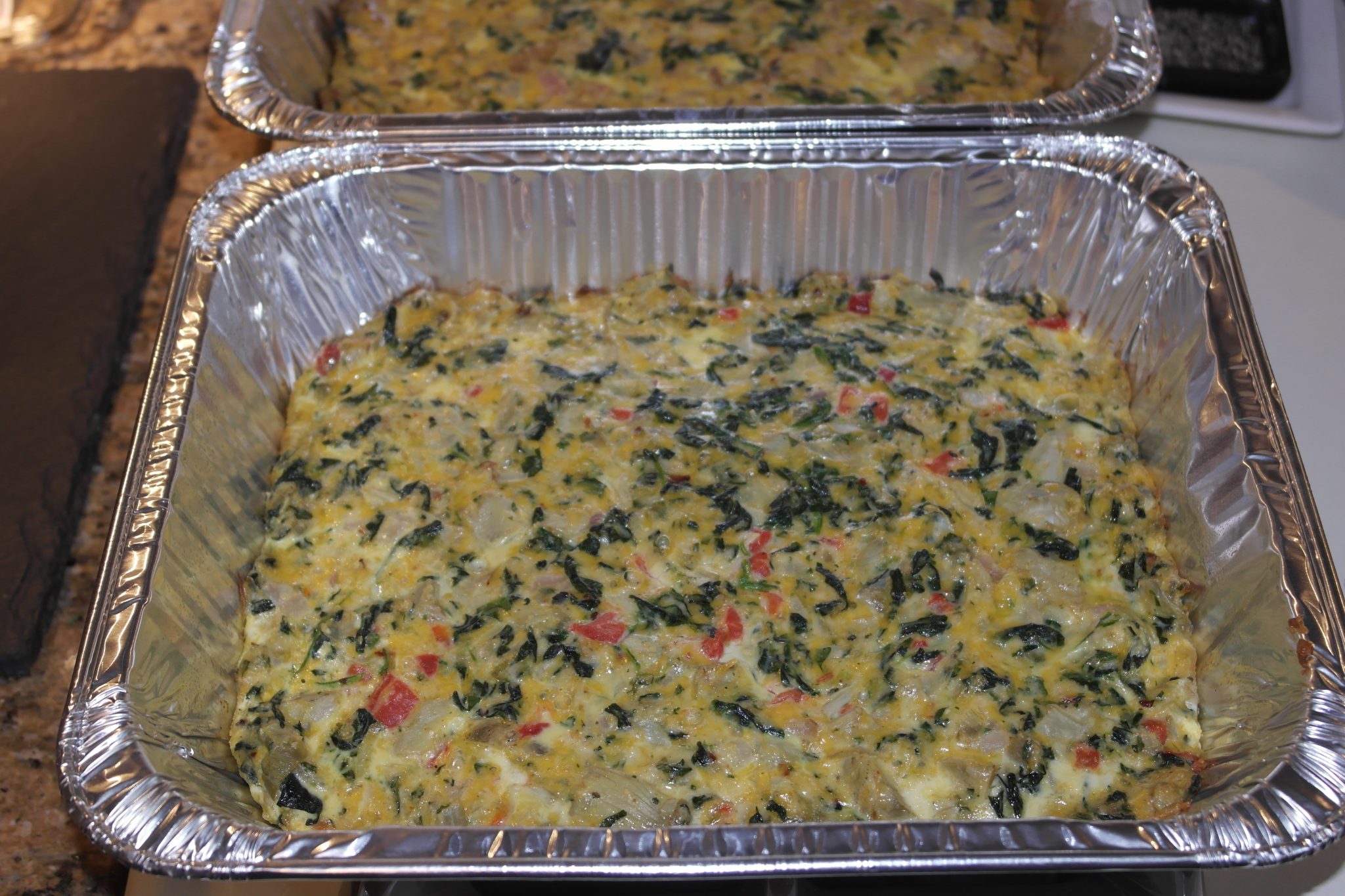 Drain marinade from half the artichokes (one jar) into small skillet; discard marinade from second jar. Coarsely chop artichoke hearts and set aside.

Heat marinade in skillet. Add onion and garlic to skillet, set over moderate heat, and stir-fry until glassy, about 3 to 5 minutes. Cool 5 minutes. Transfer to large bowl.

Pour into foil pan (or glass brownie pan – the original recipe suggest a cast iron skillet would I think would be perfect as well) prepped with cooking spray and bake uncovered about 30 minutes, until set like custard. Should be slightly browned at the edges.

Cool slightly in the pan, cut into squares, and serve warm or at room temperature.

By adding the full box of spinach and doubling the eggs and bread crumbs you can make a larger version of this. If you put it all into the ½ size deep foil pans – it will raise – making it good for a meal – but not as workable for a party unless you serve it as “spoon bread” type dish. Ultimately it’s a preference thing.

This is a favorite type of recipe – as it isn’t a set one –  explore it.

Note:  I will share the version I grew up with, which is similar to this one and uses sausage and  zucchini  and like this one, is meant to be eaten as a “brownie”  or if doubled as a brunch or egg entrée. 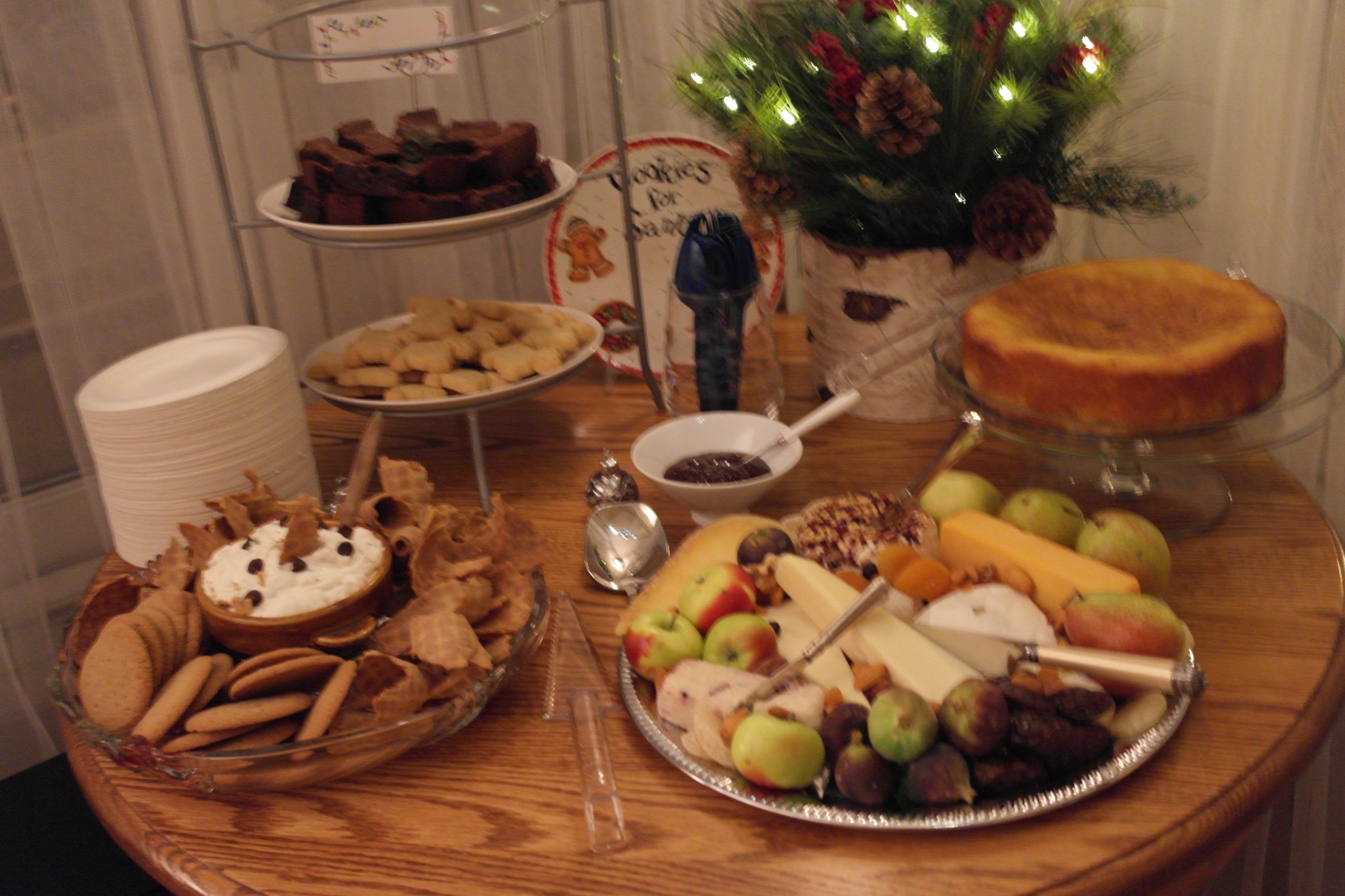 This year’s menu includes – as I post each one I will reset the link here as well. 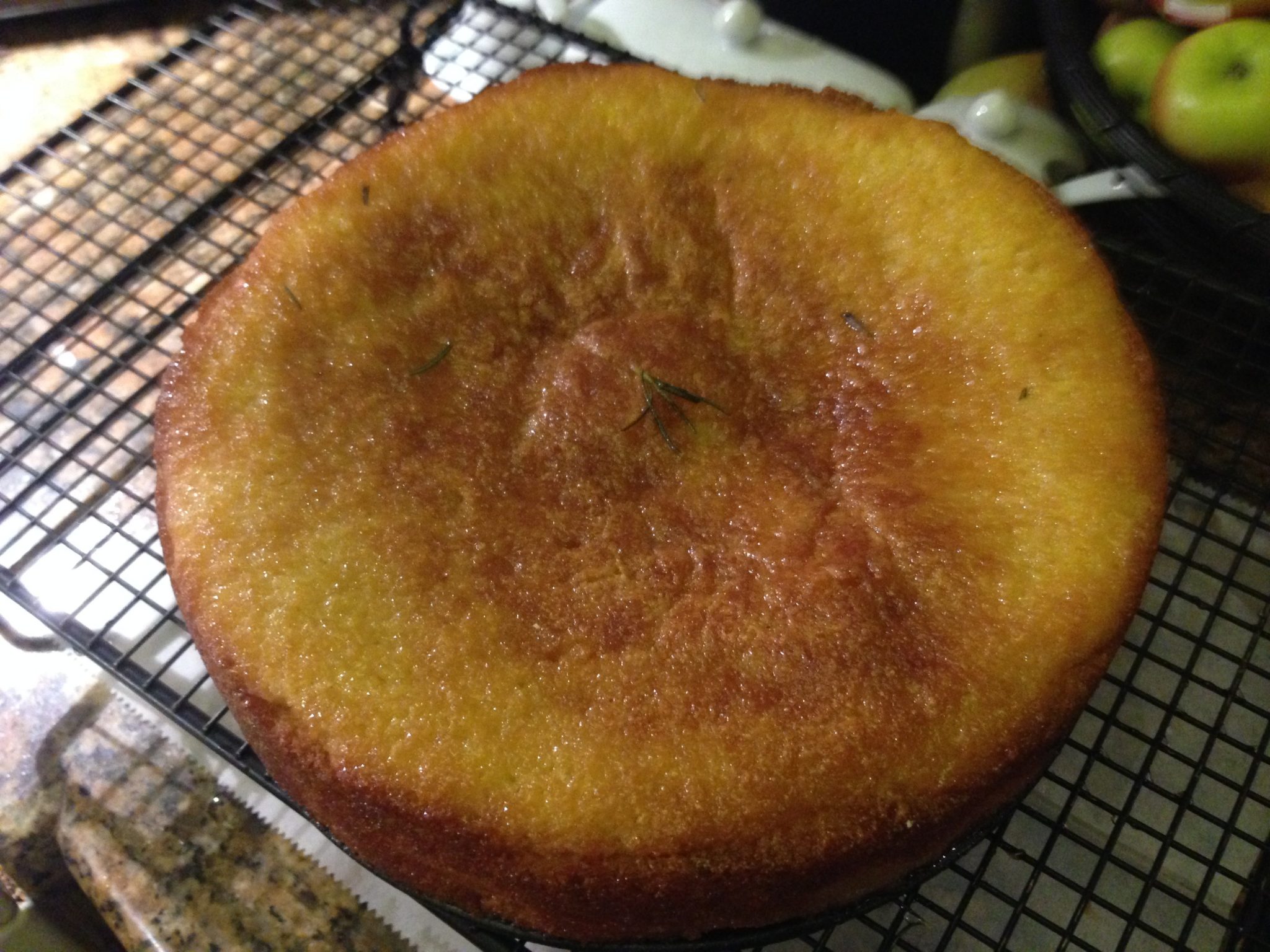 This is a great recipe to fiddle with. Try adding more pears or other succulent fruits. The sweetness is adjustable some may find that an extra ¼ in the batter works well. A light difference in texture will result with the use of xl eggs in place of large egg but no taste difference. Note: If you do not have the Buttermilk on hand, use whole milk with a tablespoon of white vinegar. At the end of the this post is the link to the original as well. 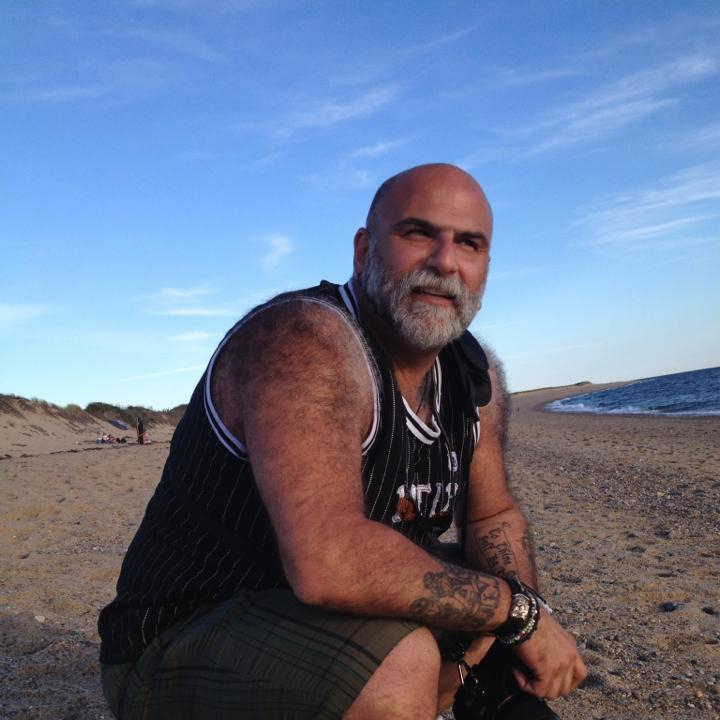 Looking forward as the sun sets

Every year I host my Annual Orphans Holiday Openhouse (AOHO) ( For the origin and history about the Orphans Openhouse, visit my post here ). This year marks my 20th one and we (Paul and I ) opted for hosting it after Christmas but before New Years eve given the way the holidays fell and many of us were working that week.

When I set up planning for the AOHO I often give myself several challenges or themes and a goal that I mostly keep to myself.  This helps me keep the fun aspect in perspective and avoid hearing old voices in my head from holidays past as a kid where I would regularly hear such loving shouts like “Merry F’ing Christmas”, “I try an make it a nice event and all I ask is that you help…” etc. phrases usually partnered with the obligatory tears and emotional blackmail. 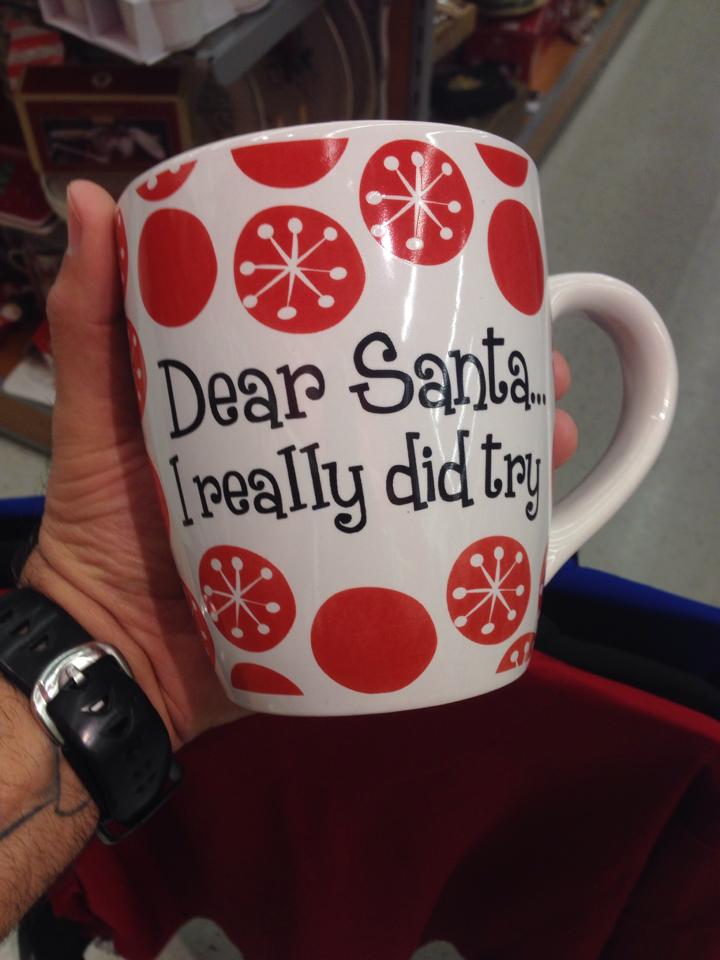 1. Create multiple menu items that would adapt to folks with gluten sensitivity, dairy allergies and food for those non-meat eating folks

2. The menu had to fit a working persons life. That menus I couldn’t take more than one day (the day of) off. So some items had to be “make or prep” ahead capable.

3. Plan well enough so that once served up – I could enjoy the party and not have to worry about being at the control cooking.

4. Try at least one new dish

The Goal for this year – was to invite new people to the mix to create some new dialogues exchanges between new people.

Ok – so enough serious stuff – on to food!

…and now on with the show! I will be posting the recipes and images over the next few days! As always – if you don’t see a recipe I’ve made – email me and Ill share it. Food is meant to be shared.. not held on a pedestal ike the holy grail and only sharing parts of it to keep your version special.