And the weekend begins…

While it wasn’t intended to be this weekend ended up a full one. With several creative writing activities in the process, including new edits to the TedXProvincetown script due next week, a big meeting on Tuesday to prep for. I also have our monthly book club and trying to get some time to get Paul out and about while the weather was nice.

What to do on a day off?

Part of the reason I like book club is the research behind the books. So for me, a “Food Lab” is an essential part of the reading.  This month’s read was the prompt for a few vintage themed recipes to go with the book “As Meat Loves Salt”.

As a “just in case,” I also figured I would do my take on a parfait with Honey Citrus Ricotta & Marscapone cheeses layered with simmered honey citrus blueberry and strawberries. These would be perfect or as toppings for either of the other two dishes in case the dishes failed or were too dry (and I happened to have the fruit handy), so they were the first to get made so they could set up overnight. 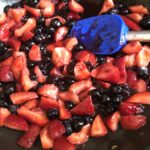 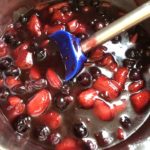 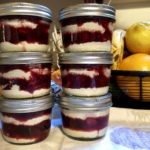 In keeping with the Great Britian/16th-century theme,  I found a great cookbook well while at the bookstore over at Fort Mason that had 16th and 17th-century English recipes reinterpreted.

One of several that caught my eye included a Sour Cream Spice cake.  Originally intended for raisins,  I did switch them out for dried cherries but it was the only “change” I made. I found a typo in the recipe that confused cardamon and cinnamon, so I opted with cinnamon.

Folks liked it. Super dense and moist, with a subtle spice taste. The batter is thick and must be over the size bundt pan I have so as with some older recipes I already do with. Next time I would only use 2/3 of the batter. It was too full and would have meant a much longer bake and be super dry. As it was this still was a little moister towards the inner ring. On Sunday, I toasted it for breakfast and really liked how that tasted with some salted butter on it. 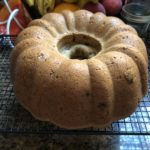 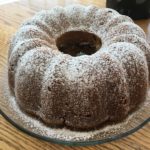 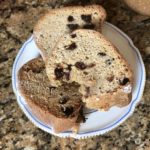 The other dish was an Apple Noodle Pudding aa s backup if the cake was dry or didn’t come out. This version of a “pudding” uses egg noodles, apples, and dried cherries as its base with butter and sugar and flour. Once cooled, all it needed was a sprinkle of powdered sugar. 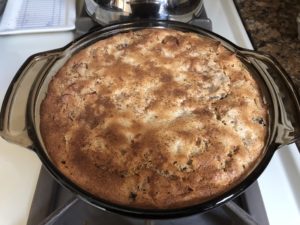 Well, let’s just say – the bowl came back not only empty but CLEAN! I definitely will make this again and experiment with different flavors combinations. I am thinking rosemary and pear next time.

As luck would have it all of them came out quite good but ya gotta love those “Plan B’s” .

Sunday was a casual day with me in my head drafting, so Paul and I took Dino up to walk around Buena Vista Park. 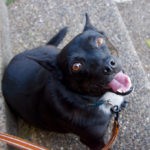 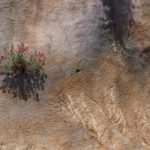 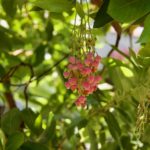 Once we hadn’t done in way too many years before heading home for some downtime and before I grilled up some dinner and was back at it.