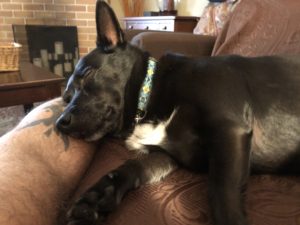 Dino has it rough

Picnic panic defense! With us, both being on vacation for two weeks and then Paul had to work in Baltimore right after it’s been a busy catch up with on my end. Paul then reminded me that it as his annual office picnic on Saturday too. So I managed to get into the kitchen and make some of my favorites to being with.  Of course, Dino was hoping I would spend more time with him after his two weeks at Hightail Hotel, than my being in the kitchen while Paul was away – but he got plenty of snuggle time later.

Perfect for a picnic as it is for dinner is one of the favorites of his office is the variation to the Black Pepper Biscotti Ifrom Valerie Bertinelli. I have made this a bunch of times and its become a perfect goto not to mention is a great based to change it up from. In today’s version, I made one with chopped walnuts and almonds (because that’s what I have handy). I also used a bit of lemon extract in place of the peel that is mentioned in the previous post since I didn’t have any handy. But go easy on lemon extract, a little goes a long way. The second version is essentially the same but without nuts or almond extract. For this one, I amped up the vanilla, added some powdered ginger and a bit of homemade ginger syrup (see the recipe below). The third version was a Spicey Chocolate Biscotti with dried cherries. This was a made up recipe, so is in draft form but I liked the version enough to bring. I think next time it needs more cayenne (most likely 3/4 tablespoon in total).  Once it gets done I will repost the final version recipe. 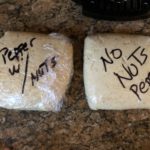 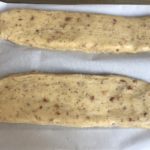 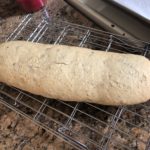 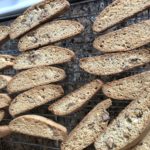 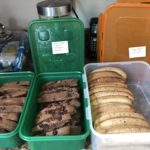 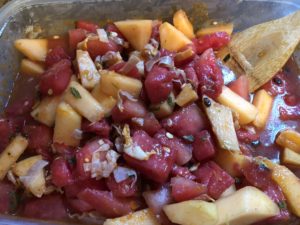 This was an easy one Summer + Picnic+ Fruit Salad. I have been making this cool watermelon chili, but on a recent episode of Sara Moulton I saw this new version that uses Watermelon, Cantaloupe, Feta Cheese, and Procuitto. I have made it now for several potlucks and news this one would be perfect. She adds paprika which gives it this sweet smokey flavor for a different twist. Sara’s version of Two-Melon, Proscuitto and Feta Salad is really good as is. Try it first then change it up for your needs. At times I have swapped in smoked ham slices and or pepperoni in place of the prosciutto. I change up the nuts from time to time.

For this weekend version, I kept it pretty much the same but swapped out 2 tablespoons of olive oil with 2 tablespoons of a local Habanero infused olive oil. You will notice that this shot has a lot of extra marinades. That is on purpose. I like to much that I save it and use it as a salad dressing base or as we did on vacation when I made it. Just add more melons.

As an extra – cold marinated cucumbers and carrots 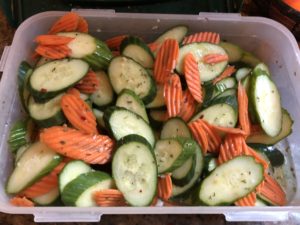 This is one from my childhood I revamped. its quick and easy to make – tastes better the longer you let it chill. But equally as good with a 30-minute marinade. Unlike the Pickled Carrots and Jalapeños I did before, these require no heating. Just chop, pour, season and chill. This one I eyeball for measurements – eventually, I will try to measure it out. Slice up some 2-3 English cucumbers on an angle, toss in come carrot slices (or buy them already fancy sliced), add 1/2 cup of white vinegar, juice of 1/2 lemon, salt, pepper, red pepper flakes, add chopped parsley or cilantro, 1/2 cup of sugar and 7 or 8 ice cubes (1/2 of chilled iced water works too if you are short on time). Mix well and leave in the refrigerator 30 min to overnight. Taste to flavors. You want a tart, sweet, herbed crunch. Most fresh herbs work. As does add sliced raw peppers (hot or sweet), radishes, even celery.

In a saucepan – cook the ginger, water, and sugar first to a boil then reduce heat and simmer for 10-12 minutes. Remove from the heat to cool 5-10 min. Once cool, strain out the cooked ginger into a clear glass jar. add a few uncooked peeled pieces of ginger and refrigerate.

Note: If you want some extra zing, add cinnamon sticks or rosemary to the simmer and strain out.