This was originally posted in February 2017 for one of our Bookclub meetings and and helped to set the theme for the Israeli/Egyptian Spy theme. 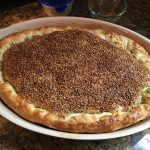 “This is borrowed from NYT Cooking, adapted from the “Zahav: A World of Israeli Cooking” by the chef Michael Solomon, it is is scented with cinnamon, dill and parsley. The recipe calls for purchased puff pastry, which makes it extremely simple to make yet wonderfully rich to eat. Leftovers will last for a few days in the refrigerator. Reheat at 350 degrees before serving.”