Many of you know I have a passion for storytelling in video/film format – especially when they are home grown over huge production commercial studio madness. Our pal Christopher Colorado Jones has a new project that is launching its Indiegogo campaign. 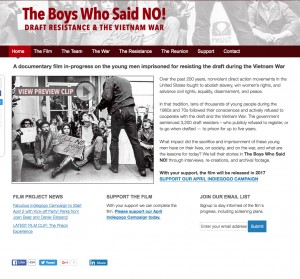 The film team behind The Boys Who Said NO! happily announces:

The link to our campaign page is HERE, where you can view a new film clip and look over our great perks to reward contributors.

The Boys Who Said NO! documents the power of nonviolence and way that draft resisters helped bring an end to the American War in Vietnam.

The film focuses on the Bay Area group called The Resistance that was co-founded by former Stanford student body President David Harris, who appears in the film. In one section Harris talks with former Weatherman Mark Rudd about violence and nonviolence as techniques for social change. Folk singer and nonviolent activist Joan Baez is also featured, as is former defense analyst Daniel Ellsberg, who tells how the courage of draft resister Randy Kehler inspired him to release the Pentagon Papers. Dr. Martin Luther King, Jr. is also shown speaking out against the war during a visit to Baez and other war resisters in prison.

Our director is Judith Ehrlich, who was nominated for an Academy Award for The Most Dangerous Man in America: Daniel Ellsberg and the Pentagon Papers. Producer Christopher Jones is a draft resister, as are members of the Film Team.

The film will preserve the story of these resisters and of their times, encourage support for today’s peace movement, and further the use nonviolent direct action for social change.

Please help our campaign raise funds (and draw in new supporters) to cover our 2016 production activities. We have two requests.

Please:
Give early and generously (all contributions are tax-deductible). Early contributions encourage others to invest in the film when they see our funding rising like a rocket!

The link to our campaign page is https://www.indiegogo.com/projects/the-boys-who-said-no–2#/ , where you can view a new film clip and look over our great perks to reward contributors.

Thank you very much for your crucial support!
For peace, justice and equality,