Another of our Thursday Night-Outs last night

We  continued on our food theme started in October with Night-Outs to the Exploratorium for After Dark, a cookbook night at Omnivore Books, to hear Cenk Sonmezoy, the mastermind and home-schooled blogger behind the food blog Cafe Fernando introduce his new cookbook; The Artful Baker: Extraordinary Desserts From an Obsessive Home Baker as part of my “Bite-Cap“, and seeing 177 Milk Street Author and Food Personality Christopher Kimball, who was in town talking about his second season of Milk Street TV.

But tonight, for our Night-Out we went back to basics with Kimball’s former colleagues, at a special live programming from KQED, hosted by the Bay Areas very own Leslie Sbrocco of Check Please Bay Area for an evening of stories, tips and socializing with cohosts Bridget Lancaster and Julia Collin Davison of  Cook’s Country & Americas Test Kitchen.

Leslie warming us up with laughter

The cohosts just have a lot of fun together

No squash to big…

While I know they have been on tour promoting the newest cookbook due out soon and the new season – it’s nice to see they have developed a fresh and casual style that fits them and doesn’t have them try to fit the former shows, recipe. These two funny, straightforward ladies, really bring “home”, the meaning of home access food. I was amazed at the time and detial, as they explained the intense amount of effort, ethics and time that goes into the recipes and shows. An even more special treat as I recently had attempted one of Cooks Country recipes for Spicy Cheese Bread to great success. I know Paul enjoyed it as well, as he whispers in my ear after hearing it mentioned, that I need to add the Curried Butternut Soup with Cilantro Yogurt to the next menu

Not having been to one of the KQED events before, I was pleasantly surprised at how much fun it was. The KQED space itself was great and being in the studio added its own charm. But what made it a super nice evening, was how approachable and friendly all of these television personalities were. The post-show social, snacking and wine testing was quite the mid-week treat.

Of course, taking home some great swag didn’t make for a bad night either with copies of Cook’s Country Eats Local, and Pistachio Oil from the folks at La Tourangelle 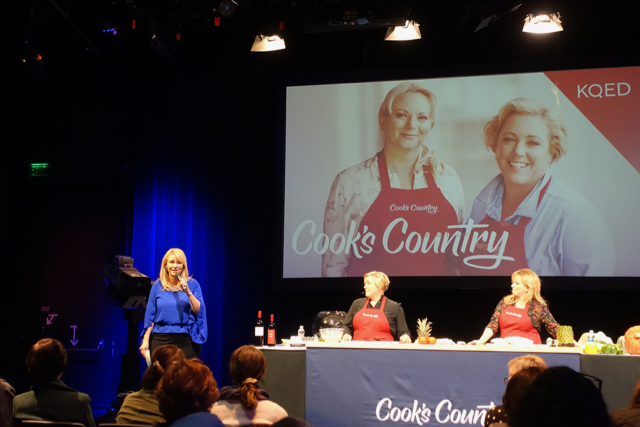 These three could be trouble

And for those of you inspired foodies

More on that can be found at http://ww2.kqed.org/checkplease/apply/